The Solomon Star featured a story on Sistas Savve's paper bead jewellery and Doris Dakei's recent meeting with the Duchess of Cambridge. The jewellery is proving very popular in Honiara selling out in the Lime Lounge in a matter of hours. We're now planning to extend our reach to other retail outlets and we also make to order. No excuse, peeps, time to be razzle dazzled by Sistas Savve! 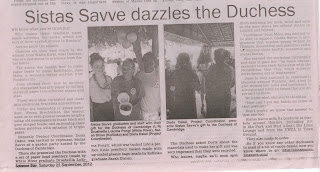 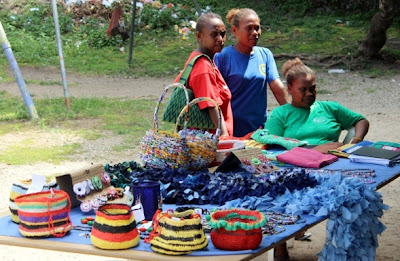 The Sistas Savve staff have had a very busy week so far, and there aren't even any classes happening! Today, we interviewed  the women from Feraladoa community who will start the Sistas Savve classes next week, to find out what they already know about sexual health and family violence. We also interviewed all the White River participants to find out what they learnt during the programme.

We are looking forward to our fourth class starting on Monday!

The White River class celebrated their achievements as they graduated from the Sistas Savve programme last Friday. The sunny afternoon ceremony was held outside at the YWCA Kindergarten, and was packed with family and friends of the twenty graduates. Several guests of honour were present, including the West Honiara Constituency Development Officer, Mr Brian Taupiri and New Zealand High Commissioner Mark Ramsden. Mr Taupiri announced that West Honiara MP Namson Tran is donating SBD$20,000 to the White River Sistas Savve group to ensure their future endeavours as a group are a success. Mr Ramsden spoke about the importance of women’s work in Honiara, and acknowledged the role of Sistas Savve in empowering women in Honiara.

Each woman received a certificate, and President Weena Brechtefeld made a speech on behalf of the group, thanking everyone for their support over the past ten weeks. After the ceremony closed, everyone enjoyed the party, which included great food cooked by the Mbkonavera 4 graduates, and lots of dancing!

Now that the women have completed their ten weeks of training, they are looking forward to sharing their knowledge with other women in their community while setting up a small business collective making products taught by Sistas Savve.

The Sistas Savve staff are preparing to welcome twenty women from Feraladoa as the fourth community to participate in the programme, and are due to start classes next week.

Looking forward to the future

The White River Sistas Savve class is looking forward to their graduation next week, but they still have lots to do before then! The class will form a small business collective to make sure they continue to benefit from the craft skills and knowledge they have learned at Sistas Savve. The class met with Jenny Kaniko, the Community Liaison Officer, to discuss how the collective worked, and to vote for a committee of women to be the leaders.

Although many great people were nominated for the four positions, the successful candidates were Weena (President), Clerah (Vice-President), Mary (Secretary) and Joyce (Treasurer).

Under the leadership of Weena, the Committee will drive the operation of the collective, and make sure it can continue long after their Sistas Savve classes have finished. They will make sure that communication between the women is good, by organising meetings and discussing issues, and they will ensure the finances are protected and accurately distributed. It is hoped that this support will enable all the women to benefit from the collective and experience improved livelihoods for them and their families.


It’s nice to catch up with our Sistas Savve graduates, so last week, Hannah met up with three women from the Mbkonavera class to hear about what they’ve been doing since they graduated in June. Christally (22), Andrea (25), and Veronica (29) have all received internships at the Solomon Islands Kitano Mendana hotel, through a program called “Youth at Work”, which is run by the Secretariat of the Pacific Community (SPC).

Christally has a full-time house-keeping position, which involves doing all the cleaning and laundry for guests. She says she would love to use her time at the Mendana to learn about starting a small business, which would build on what she has already learnt at Sistas Savve. Andrea works at one of the in-house restaurant as a waitress, and she has decided to pursue a career in hospitality and tourism after discovering her new skill for working with guests.  Veronica works in the store room, issuing food to the chefs and placing orders with suppliers. All three women would love to be offered a permanent position at the end of the internship program, to ensure the steady income that they need to realise their goals and better support their families.
The jobs are the first formal employment for Christally and Andrea, who stayed at home raising their children before joining Sistas Savve. They are all very proud of their achievements, and report that they’ve learned lots of new things since starting their respective jobs. They credit Sistas Savve with teaching them how to write CVs and for offering assistance with the application process.
We are looking forward to catching up with these three girls next year to hear about how they are reaching their goals!

By providing a range of informal education opportunities, the young women will develop skills and knowledge that will enable them to earn a livelihood and develop leadership, reproductive health, nutrition, and parenting skills. Over two years, Sistas Savve will provide opportunities to 120 young women, their families and communities. 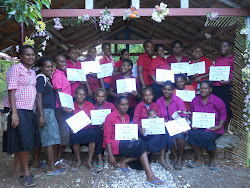